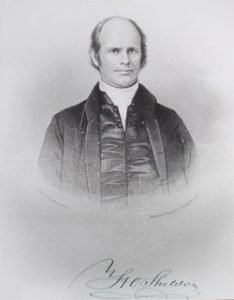 Rev. H.O. Sheldon spent a lifetime collecting and documenting information on Sheldons.  He organized this information into what he called The Sheldon Magazine.  From June 1855, until October 1857, he published four volumes as proof copies that he sent to his correspondents for corrections and additions. These proof copies were never intended to be a final product.

He intended to publish a fifth volume, but this, and the final publication of the first four volumes was never accomplished during his lifetime.  The Sheldon Family Association, with revisions and updated indexes, reprinted Volume I in July 1973, Volume II in October 1965, Volume III in November 1962, Volume IV in February 1961, and the previously “unprinted” Volume V in July 1957, and the “lost” Volume VI was printed in August 1969. 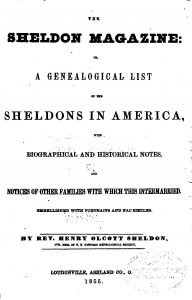 Rev. H. O. Sheldon’s books and property were lost during the Civil War.  About 1882, he sent out a printed postal card from Oberlin, Ohio, asking for revised data.  He said that he had 17,000 names obtained by over 3,000 letters and years of travel.  The NEH&G Register, January 1883, 37:90, printed the same announcement and that “this work will soon be put to press.”   He had died two weeks before, aged 83 years, and his obituary appeared in the next issue.

Apparently the original leather-bound manuscript was passed on in 1905, to (S#4384) U.S. Senator Philetus Porter Sheldon, owner of the Jamestown (N.Y.) Post, for publishing.  Then it disappeared.

After many years of searching throughout the United States,  it was found nearby in Medina, N.Y., in 1955, by Leland Locke Sheldon in the possession of (S#9521×1) John Layton Sheldon, Jr., an attorney who had been publisher of the Lockport (N.Y.) Journal.  He stated that he had obtained it about 1906, from Jamestown in a parcel post package after requesting it, but that nothing had been printed.

This invaluable manuscript consists of about 700 pages of 9″x14″ rag ledger folio beautifully written and bound in morocco.  It had been rewritten and revised 5 times. The third revision being The Sheldon Magazine, 1857, shows that there are over 1,500 typographical errors in the printed copies.

Today, some volumes of The Sheldon Magazine are out of print.  The Genealogy Committee of the Sheldon Family Association has decided not to reprint the Magazine but it is available for viewing  by clicking on the image or button below. 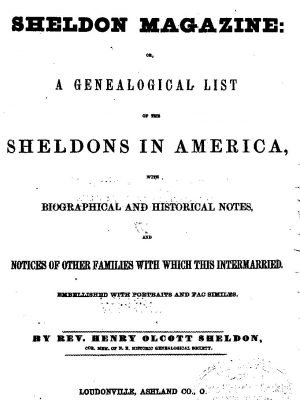 I have a great grandfather Sewell Sheldon. He is a brick wall. I cannot find his parents or siblings. He stated in a census his parents were from New York and he was born in Indiana.He lived in Dearborn and Ripley counties in Indiana. He had several children and was married twice. Have been in Ancestry but cannot go any further with him. Same with his descendants from from his first marriage. We are all in the same boat. Got his marriage license and census information but that is all. TIA ... See MoreSee Less

wondering if we might be related and how to Charles Sheldon, of Alaska fame and the Sheldon-Hart Refuge in Nothern Nevada. He was highly invilved in Alaska, before it was a state. ... See MoreSee Less

We have his lineage in our database. Send me a PM with some info about your Sheldon parents and grandparents. Maybe we can figure it out!

My line goes to him John of SOuth Kingston, it’s in the data base, oh thinking of the Bush pilot.sorry

Hello Sheldon's,I have a question that's come to mind recently:Why does the Sheldon line have a "coat of arms" and "family motto"? We're we a noble line? ... See MoreSee Less

To suffer is best

Here's a little background on it. sheldonfamily.org/sheldon-coat-of-arms/

Hello all, I'm returning to this post in hopes of getting in touch with Wheaton Kelly or Dale Sheldon, concerning the Birmingham area. I'm currently in Cardiff for a few weeks and would like to see some of the Sheldon specific sites. Any help would be appreciated, thank you.

Hi David. Do you know Albert W. Sheldon’s dates of his birth and death? That would help us to make sure we have the correct Albert.

My name is Dennis Shelden. I am Kimberly Shelden brother. My great grandmother told me once that my family is related to the Dalton Gang. The old west outlaws. Just wandering if anyone may have any info. Thanks in advance ... See MoreSee Less

This would take a little genealogy work, but the Dalton brothers were sons of James Lewis Dalton (1826-1890) and Adeline Lee Younger (1835-1925). The question would be (here) whether your Shelden ancestor(s) married to the Dalton lineage, or whether it is a separate line altogether. Interesting, Dennis!

My husband will be so jealous…

Welcome all.....you're in for a real treat. A staff who all are very quick and willing to help us!

"There is no such thing as fun for the whole family."