The purpose of the Sheldon Memorial Plaque is to give special recognition to those who have made significant contributions to the SFA.  The plaque was created and donated to the SFA in memory of Marie Sheldon Hin, S#4812X1321-1, a member and regular SFA volunteer. 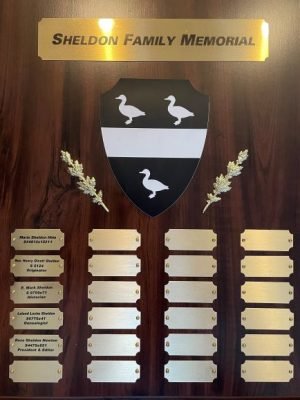 All of these individuals typify a spirit of selflessness, sharing, and collaboration.  They constantly yearned for improvement, were forward-thinking, and were cutting edge.

For their contributions and the passion they embodied, we honor them on the SFA Memorial Plaque.  May we strive, emulate, and achieve as much success as they did.

Recognized at the 2022 Board Meeting

Emily Hortense Sheldon, whom our records and SFAQs show went by the name Hortense, was an essential part of the Sheldon Family Association history and did much for the organization.  She is a Godfrey descendant, and her Sheldon number is S9595x721.

Hortense wrote and published the book Sheldons before the 1700s in 1961, which traced the roots of the Isaac line. Not everyone agreed with her conclusion about the phantom Isaac; thus, it was perhaps slightly controversial, yet it remains a well-studied monograph. The hope someday is that a clear DNA path will resolve this controversy. She also explored the Bermuda and Barbados routes of Sheldons to America in colonial times.

Her collection of records is impressive. Later in her years, after she could no longer live at home, these records were transferred to Rose Newton, unfortunately, not before sustaining some damage and possible vandalism.

Though we have no clear connection to her grand nephews and nieces, our records show there are some family members. I hope a message to them can be communicated about how great this woman was and how she was such an essential part of the Sheldon Family Association’s History.

Recognized at the 2021 SFA board meeting

Leland Locke Sheldon served as a genealogist for the Sheldon Family Association and was the one to discover a number of libraries and Sheldon cousins that possessed the original Sheldon Magazines published by Henry Olcott Sheldon.

He was the one who started the transcribing of that information onto the “SFA cards.”  His efforts also included reprinting the Sheldon Magazines.

It is upon his shoulders that a long list of genealogists and researchers followed. They expanded and improved his efforts and began the process of digitizing the “SFA cards.”

Leland’s nephew, Clinton Bayard Sheldon, described him as a generous and kind person, always concerned about his fellow man.

Recognized at the 2021 SFA board meeting

Rose was a critical part of setting up the trip to England in 1993.  She was an excellent researcher and a prolific writer. Ultimately, she became the guardian of many Sheldon records. Concurrently, she was an active member of the Allen County Public Library. Genealogy ran deep in her soul. Consequently, all the Sheldon records she possessed and collected over the years were given to the ACPL in 2014 for preservation with more given after she passed.

Like his great-great-grandfather, Henry Olcott Sheldon,  we honor Mark Sheldon for his tremendous contributions which moved the Sheldon Family Association forward. From data management to SFAQ publication and annual meetings…. virtually everything we do, he touched in some way.

The Sheldon Family Association traces its database back to the initial work of the Rev. Henry Olcott Sheldon. His seminal work has over the many years been elaborated on, yet his initial findings were very prophetic.  He detailed for us the earliest of Sheldons who came to the colonies during very turbulent times in England.  He traced the movement of pioneer Sheldons westward as the colonies formed to be a country and expanded into what we now call the Midwest. He even spent energy trying to specifically ascertain where our English roots lay. That endeavor was not successful, but it pointed to the calling the Sheldon Family Association still pursues today.  “Where did we come from?”

We have people from other countries in our group. Most of our tree data is US and Canadian, although the oldest ancestors are from England primarily. There is a Sheldon Surname group that has a lot of UK and Australian people in it. Neale Sheldon runs that Facebook group. We'd love to know more about your pioneers, it could help our research!

No sir, I'm a member of the group, and I'm Canadian, eh, not American, so much so that I know well what you mean by 'burned whitehouse.' In fact, I believe it was retaliation for the burning of Fort York, at the town of York, the original name of my home town, Toronto. You've heard of the song by Johnny Horton perhaps, the Battle of New Orleans? Well, we have our own version of that song, when Sir Issac Brock and Tecumseh and their warriors - British, Canadian, and First Nations - sent an American army 'a runnin' back across the river when they tried to invade Canada.

I know all about when the White House was burned down. Sheldon's have been in the USA before it was the USA, from the 1600s.

The Sheldon Family Association includes all of us, regardless of national origin.

most of us American Sheldons have ancestors from the UK - it has been a major effort to trace those lines back (Y) so, we'll still call you "cousin" - lol 😃 (Y)

I have discovered an 1850 census for Alden, County Erie, New York, New York. It shows my Great Great Great grandfather, John Sheldon 46 yrs, wife Permelia 35 yrs, daughter, my great great grandmother Alvira Elizabeth 17 yrs, unknown person 15 yrs, Alice 7yrs, unknown 15, Francis 5 yrs, unknown, 1 yr. Is it possible that this census might help find marriage records of Great Great Great Grandparents, John Sheldon and Permelia (Buss or Burr?????) Sheldon? I have over the years picked up that John and Permelia were married on 12.3.1832 in Alden, Erie County, New York, New York. I just can't be sure what Permelia's last name was. I had discovered Buss and Burr. It would be enlightening not to mention how exciting to finally sew up that loose end! Thanks for any information or help that you may have to offer. Thank you.....Mary Lou Most

Rootstech 2023 will take place on March 2 - 4 in Salt Lake City. You can sign up for the online presentations but you must register in advance, and the event is free online. The Relatives Near Me feature that goes on during it is super cool. If you wish to register for this event You can do that here: ... See MoreSee Less

The SFA donated to this project!Jeff Fellinger, Willard Street Traditions restoration artist, recently reinstalled a set of restored windows on the first floor of the Judd-Harris House. The Henry Sheldon Museum extends its thanks to all of its friends, donors, and members who contributed to the windows restoration project at the museum. Special thanks, too, to the 1772 Foundation, the Osprey Fund, and the Vermont Division of Historic Preservation for supporting this project. The windows project began in 2021 and, when it is completed this winter, 28 double-hung window units and one over-door fan light sash will have been restored and reinstalled in the museum's iconic Judd-Harris House. The Judd-Harris House was the residence of the museum's founder, Henry Sheldon, and it has been the home of the institution's collection since 1882. ... See MoreSee Less

It's Quicksheet Saturday! Have you tried all 60 of these Free Online #Genealogy websites?Do you have a number of "go to" free websites for searching and browsing for pertinent genealogy records and record collections? These are my favorite websites for you to skim through. Maybe there are a few you don't use or may not have even heard of.Get this Free Downloadable Quicksheet and start visiting these websites. You'll be glad you did!theancestorhunt.com/blog/60-free-online-genealogy-websites-you-should-be-using/ ... See MoreSee Less