SFA Looks at The Sheldon Coat of Arms

Sooner or later,all researchers discover heraldry, especially when they find a coat of arms of their surname. The question arises, “Could we use this since it is our name?”  Reading on, we learn the use of arms began in the 12th century as a way of identification of friend or foe for heavily armed knights, during battle.  Through the years, heraldry became established as a system of hereditary family identification.

By sectioning the crest in parts, halves, quarters, etc., various sons’ and wives’ lines could be visually identified by additions and changes to the family art work. These were granted by the crown to a particular family as theirs alone, and so registered.

A study of American History reveals the colonists agreed to forever give up the right to bear arms. A closer study will show how this included heraldry. The governments of many nations long ago abolished heraldry and social privileges that once belonged to the upper classes, though countries still maintain historic library collections which show family lineages recorded through heraldry.

In the United States, anyone may create and use a coat of arms for a trademark or logo.  This type of creation and usage is called “arms of assumption” and while several firms create and sell such devices, few are authentic and the buyer should be aware of this.  Simply because a family name is the same does not mean one may use the arms, further study of rules should be made before assuming this right, or perhaps, use a logo instead.  Often in modem genealogies, a well researched and documented work will be criticized most severely, and rightly so, for displaying such a device in the first few pages of the work, whereas, they would have been praised for including the same as an item of interest for further study in the appendix.

Early SFA researchers were interested in the subject of heraldry evidenced by the file we share today. They invited Dr. Harold Bowditch to speak about ancient English Sheldon Arms at the Reunion at Middlebury, Vermont, in August 1960.  He stated coats of arms usage rights descend directly from father to son, but not collaterally, for instance, from uncle to nephew.  Hence the mere fact a Sheldon rightfully bore a coat of arms does not mean anyone whose name is Sheldon has a right to appropriate it. This right is limited to the direct descendants of the man who rightfully bore the arms.  The eldest son could use the design during his father’s lifetime, but was required to add a special mark called a “label”, which he would remove at his father’s death.  The younger sons were required to make some permanent change in design for their identification.

3. On a chevron (two diagonal stripes meeting at an angle), three Sheldrakes,

on a canton (a region of a field) a rose.

4. A bend between two crosses.

Dr. Bowditch recommended since the American Sheldon immigrant ancestry lines at that time, were not documented to English families or heraldic lines, SFA would be wise to adopt a trademark or logo reminiscent of the name, yet not invading the privacy or rights of those of English ancestry who were.  This was done by SFA and is reflected in the logo, a crest with ducks and the Association name. (See Fig.1 & 14 below)  The logo was probably based on the coat of arms shown in Fig.14 which was a part of Benjamin Olcott Sheldon’s application for “The Abridged Compendium of American Genealogy.”  Leland Sheldon liked the one E. Mark Sheldon used to illustrate his Sheldon Magazine extension in 1955. It was prepared for him by a photo lithographer from a piece of Ruth Bradley Sheldon’s engraved stationery. (See Fig.2)  Through the years, sometimes with Mark’s permission sometimes not, Leland used his drawing.

In 1988, Mark wanted a logo for the SFA Newsletter and modified his crest by way of a computer graphics editor for use in the SFA Newsletter banner. Fig.2 shows the top of the shield is square with a helmet on top.  The simplest edit was to erase the filigree, cut the helmet and fill in the shield.  (To those who have written to ask where the SFA logo peak went, the point may someday return when computer art is more compatible with curves.  We have not arbitrarily changed that which you selected, but we work in the framework of present computer capabilities to give you a neat product.)

An interesting question was asked of Rose who made badges for several reunions, when Mark asked, “Where did you get that crest?” (See Fig.3)  Though similar to his, it was researched from the Woolworth genealogy of S1131 Mercy Sheldon Woolworth.  Since they are of the Isaac line, an “arms of assumption.”  It was used for badges because it was neat, but not correctly so.  Marie Sheldon Hine has crafted a beautiful Sheldon banner which employs the Association logo with different flourishes which infringe upon no other art work and [was] displayed at annual meetings. (See Fig.4)

If you belong to an American Sheldon line with an English family connection, you should study to discover if you have a rightful heraldic design.  Let us know and we will be glad to spread the news.  The illustrations which follow are, for the most part, from the files of past Genealogy Chairpersons, who either discovered them during research, or received them from researching cousins.  They represent ancient Sheldon families of Europe and a few are assumption arms. If the correspondent or source is known, it is listed.

Fig.5B is from stationery of a correspondent, an unsigned arms report to Leland, possibly Ruth Bradley Sheldon.  Notice the similarities of Fig. 5A and 5B.

Fig.6 was sent by Helen Sheldon (Marie Hine and Clara Gutermuth’s mother,) to Leland with the following notation: “…. This is the same arms as seen at the Quaker Street Cemetery, where many of the Quaker Sheldon descendants of Sir Edward Sheldon of England, to whom the coat of arms was given (are buried).”  Notation on back of photo “from John Sheldon Fisher see S8596 Eliza Ann Sheldon.”  Note: Sheldon on the right side of scarf.

Fig.7 is impaled (divided vertically) to share with another family.  It was Dr. Bowditch’s opinion, it belonged to a bishop.

Fig.8 is similar to the Ralph Sheldon arms. Figures 7 and 8 were sent to Leland by Mrs. Neil Sheldon, St. Oneida Lane, Schenectady, NY.

Figures 9A and 9B are English heraldic book plates and are attributed to a Ralph Sheldon, b. 1623, son of William Sheldon of Beoley, Worcestershire.  Ralph is said to have written genealogical histories now in the College of Arms collections.  Notice the Sheldon birds in the two corners with added families in opposite corners.

Fig.10, an old unlabeled photograph, the ducks are different and the design is very plain.  Embellishment around the edges, called mantling, is absent.

Fig.11 is the arms of Henry James Sheldon,Esq., of Brailes House, whose wife was from Dublin, heir of Ralph Charles Sheldon, 8th in descent from William Sheldon of Beoly.  These arms were sent to Leland by a person with the initials MBL who was not sure of the source.

Fig.12 seems to be a page from an old book by Anthony ‘A Fig Wood of Oxen’, attributed to the library of a Ralfe Sheldon.  Arms design labeled Ralfe Sheldon of Weston Parke in Warwickshire 1676.  Notice the different shape of the ducks, and the still different family additions, the flying dragon with an arrow for a tongue, similar to Fig.9B.

Fig.13 is a drawing sent to Hortense by Edith Madsin in 1962.  She was told it was a marker said to have been in Boston near where the first Sheldon landed. Notation n the back of the drawing “New England Family Coat of Arms by Andrew F. Donnell.”  A letter to E. Hortense Sheldon, dated 16 Nov. 1962, from the Public Works Department stated, “A search was made in the New England Historical Society, the Boston Athenaeum, the New England Genealogical Register, and the Boston Art Commission.  The existence of such a marker is very doubtful.”

Fig. 14 is taken from original filing papers to Abridged Compendium of American Genealogy for Benjamin Olcott Sheldon.  The papers were used by Ruth Bradley Sheldon and are in the SFA files.

Editor’s Note: Fig.15 is a reproduction of a coat of arms found in “The Sheltons” by Kathryn Morris Brown published by Keith Press, Inc., Knoxville, TN in 1981. It is interesting to note the motto, Optimum pati (It is better to suffer) and the Sheldrake crest.  Throughout this publication, the name is sometimes spelled with a ‘d’.  Is there a connection between the Sheldons’ found in SFA records and the Sheltons who settled in the Southeastern part of the United States?

Fig. 16 was created by SFA member Jack Sheldon and provided to the SFA for use as our official logo

Hover over images to view the figure numbers 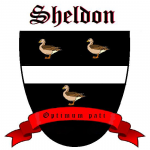